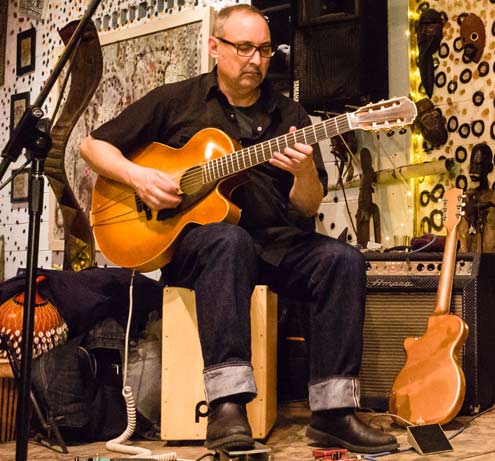 Guitarist Smokey Hormel's touring and recording career includes work with Tom Waits, Beck, Johnny Cash, Joe Strummer, Neil Diamond, Norah Jones and Adele, among many others. He explores American Roots music, Western Swing, Bossa Nova, and African music in both his work as a sideman as well as with his own musical endeavors Smokey's Secret Family and Smokey's Round‑up.

The Blasters and The Blue Shadows

In 1996 Smokey joined rising star Beck for the acclaimed Odelay tour. Smokey and his arsenal of vintage instruments toured the world in Beck's band from 1996 thru 1999, and again in 2003. Smokey's sensitive slide guitar and samba skills made their mark on the Tropicalia-inspired Mutations album. He played on Beck's Midnight Vultures and Guero, and is heavily featured on the melancholy Sea Change and Morning Phase albums, the latter a winner of a Grammy for best album of 2014. He once again joined Beck for touring around the world in 2012-2014.

Get Behind the Mule

In 1998 Tom Waits enlisted Smokey's minimalist blues guitar for a Los Angeles concert and an appearance on VH1's Storytellers. Smokey joined Waits for the recording of the 1999 Mule Variations album, contributing guitar, dobro and a pickup truck full of African instruments. Smokey subsequently played guitar, banjo and mandolin on the critically acclaimed Get Behind The Mule tour.

Smokey has been a key player on numerous Rick Rubin produced recordings, most notably the haunting Johnny Cash version of Nine Inch Nails' Hurt as well as the smash hit Adele album 21. Besides contributing to a total of five Johnny Cash albums, he is also featured on Rubin produced albums by Neil Diamond, Justin Timberlake, the Dixie Chicks, Josh Groban, Kid Rock, and Jennifer Nettles. The sessions for Johnny Cash's When the Man Comes Around provided Smokey with the opportunity to collaborate with Clash frontman Joe Strummer, their co-written song The Long Shadow later appeared on Strummer's Streetcore album.

Smokey's versatile style is highly sought after for a variety of studio work, film scores and television shows. Among the many notable artists he has recorded with are Norah Jones, Rufus Wainwright, Bernie Worrell, David Lynch, RL Burnside, kd Lang, Marianne Faithfull, and Beth Orton. He can be heard on film scores such as David Lynch's The Straight Story, Todd Haynes' I'm Not There, Michel Gondry's Be Kind Rewind and Kelly Reichardt's Old Joy, Wendy and Lucy, and Night Moves. Throughout the 2000s he was a regular player and occasional composer on the musically inventive cartoon TV series The Backyardigans.

Smokey has continued the exploration of his longtime interest in African guitar with his own band Smokey's Secret Family. Since 2006 he has played New York shows with a varying lineup of horn players and percussionists, eventually releasing the self-titled Smokey's Secret Family. Showcasing Smokey's free flowing, deftly melodic guitar playing, Smokey's Secret Family is a joyous interpretation of Congolese music of the 1950s, a rich era of Afro-Cuban styled rumba. Another ongoing musical project is Smokey's Round-Up, a return to his early love of 1930s Western Swing music. Since 2008 the four piece Round-Up has played regular weekly Brooklyn shows, amazing audiences with virtuoso guitar and a vast repertoire of great, long lost American songs.

After appearing on Norah Jones' album The Fall Smokey spent 2009 and 2010 as guitarist on her world tour, and still managed to find the time to play on Adele's 21, the biggest selling album of 2011. 2012 thru 2015 found him back with Beck for extensive touring and recording, all while continuing to make his musical mark in New York City with both Smokey's Secret Family and Smokey's Round-up, offering up vibrant live musical experiences like no other.

Smokey talks about his work with the Blasters, Lee Allen, Beck, Rick Rubin and Johnny Cash, his love of Brazilian music, and his early days in Los Angeles. From the Liner Notes Legends series profiling veteran session musicians.